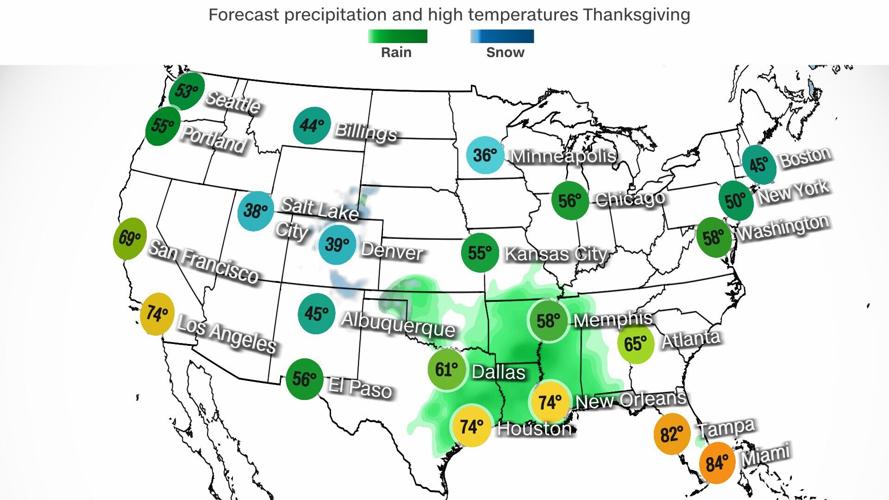 Rain and a few thunderstorms are possible over eastern portions of the Southern Plains and much of the Lower Mississippi Valley on Thanksgiving. 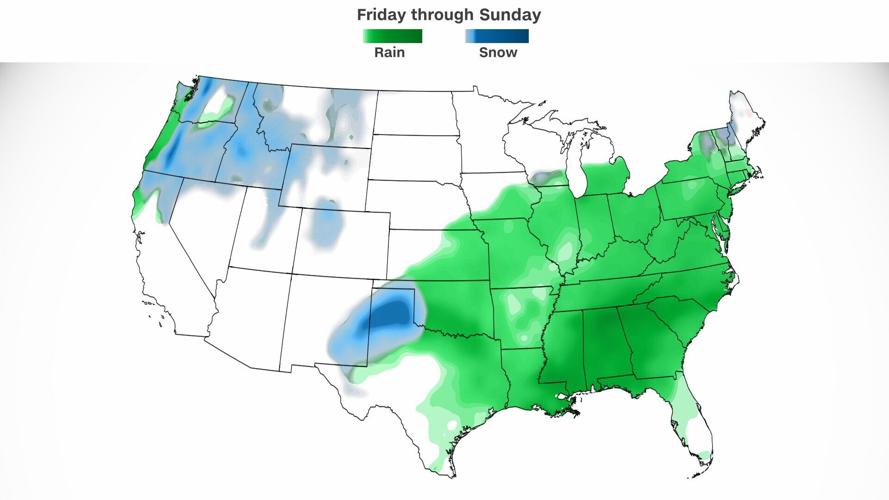 Rainfall spreads through the South Friday, working toward the Northeast by Sunday.

Rain and a few thunderstorms are possible over eastern portions of the Southern Plains and much of the Lower Mississippi Valley on Thanksgiving.

Rainfall spreads through the South Friday, working toward the Northeast by Sunday.

Thanksgiving is only two days away -- and if you are one of the more than 50 million people packing bags now to get ready to hit the roads or skies -- there may be a few weather issues that could snarl your travel plans.

While much of the country will experience a tranquil Thanksgiving week, large portions of the South could be impacted on Thanksgiving Day and the entire East Coast could be in for some rough weather as travelers return after Thanksgiving.

Sign up here to get weekly forecasts from CNN meteorologists

Where the rain and snow will be Tuesday and Wednesday

Getting to your Thanksgiving destination will likely be easier than coming home -- at least as far as the weather goes.

The only real trouble spot to start the holiday travel will be across the Pacific Northwest.

A cold front is making its way across the region on Tuesday, bringing showers, mountain snow and gusty winds. The rain will persist through much of the day and into Wednesday before the weather starts to dry out.

Torrential rain isn't expected with this system, and airlines shouldn't have a problem, but drivers should use caution.

The biggest issue for road travelers will be mountain passes.

"Winter weather advisories for the Central and North Cascades have been issued with 6 to 12 inches of snow expected" above 3,000 feet, the National Weather Service in Seattle said.

Stevens Pass is expected to get the most snow and driving could be treacherous.

The snow will also be pushing into Idaho where they could get up to 2 inches, with 5 inches at higher elevations.

The snow and rain should be out of the region before Thanksgiving Day. That's when a much bigger storm will start to take shape in the South.

Thanksgiving storm in the South

A storm system will begin to develop on Thanksgiving Day over the Southern Plains and pull in moisture along the Gulf Coast.

While most of Thanksgiving Day will stay dry, rain will begin to fall and intensify through the afternoon for much of Central and East Texas as well as Louisiana, Arkansas and the Lower Mississippi River Valley.

"Are you thankful for rain?" Asked weather service forecasters in Houston. "Because how willing you are to answer yes to that question will probably play a pretty big role in how much you enjoy the holiday on Thursday."

They are right. The forecast looks wet for much of the South on Thanksgiving Day, with some areas across eastern Texas and central Louisiana getting more than 2 inches. Areas along the Texas coast could also see a few thunderstorms.

"Unfortunately, this could put a damper on some of your Thanksgiving cookout/cooking plans, as a lot of this rain looks to be heavy at times," the weather service in Shreveport said.

Not only could it be a wet afternoon for football across many backyards throughout the South, but rain and even a rumble of thunder could impact the annual Dallas Cowboys game on Thanksgiving Day.

While the timing of the rain might be a bummer, nearly 70% of the South is in drought conditions, so the rain is something to be thankful for.

On the western side of this system, snow could fall across portions of the Texas and Oklahoma panhandles.

"A dynamic upper-level system is forecast to potentially bring impactful winter weather to the Plains region beginning Thanksgiving and may continue into Saturday morning," the weather service in Amarillo said. "Snow, mixed precipitation, and rain are all possible during this timeframe which could greatly impact any holiday related travel."

Some models are suggesting as much as a foot of snow could fall in this region between Thursday and Saturday.

The area of low pressure bringing Thanksgiving rain to the South will make its way to the East for post-Thanksgiving travelers. The rainfall will expand on Friday, stretching from the Canadian border to the Gulf Coast.

Anywhere from New Orleans to Cleveland, Atlanta to Boston and even areas around Buffalo that are digging out of 80 inches of snow will have the chance of rain on Friday.

This quick shot of rain will make its way off the East Coast by late Friday night, ahead of the main event.

Another area of low pressure will march up the Eastern Seaboard later in the weekend and it could bring some major travel concerns.

This storm "will bring potential for a quick hitting moderate to heavy rainfall Saturday night/Sunday (heavy rain axis dependent on low track and rate of intensification) in addition to gusty winds in its wake late Sunday into Monday," the weather service office in New York City said.

Details are still being fine-tuned with this one, with uncertainty still looming, but we could see very heavy rains spread across the entire Northeast and New England for the second half of the weekend.

Some good news: There's no snow forecast except for a possibility at some of the highest elevations across New England. But the cold rain could definitely be enough to slow your return travel home.

Much of the East will stay pretty mild for Thanksgiving Day with temperatures in the 50s and 60s for most of the South, the Ohio Valley and Mid-Atlantic.

The Northeast will stay in the 40s and 50s for the most part.

New York City should see lows in the mid-30s on Thanksgiving, with highs around 50. Sunny skies and light winds should prevail allowing for the famous Macy's Thanksgiving Day Parade balloons to fly high.

Most of the Plains and Midwest will see temperatures in the 40s and 50s with the exception of the northernmost areas where temperatures will be in the 30s.

Exercise on a bicycle changes 80-year-old with Parkinson's life