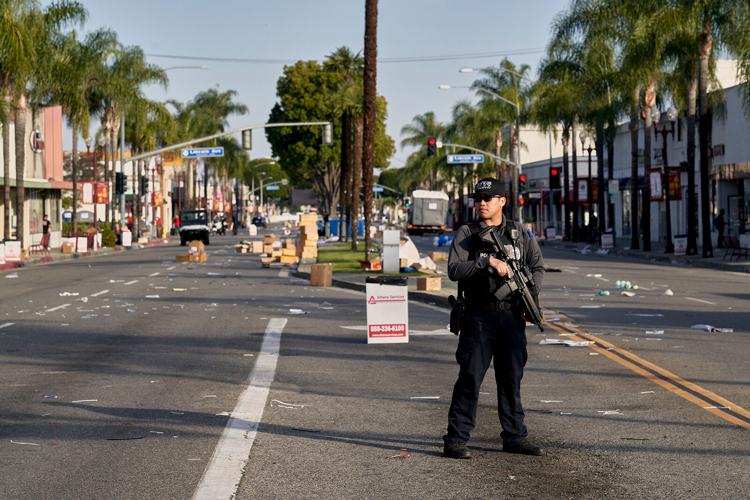 A Monterey Park police officer stands guard near where vendor tents once stood for the Lunar New Year festival near the Star Dance Studio in Monterey Park, California on January 22. 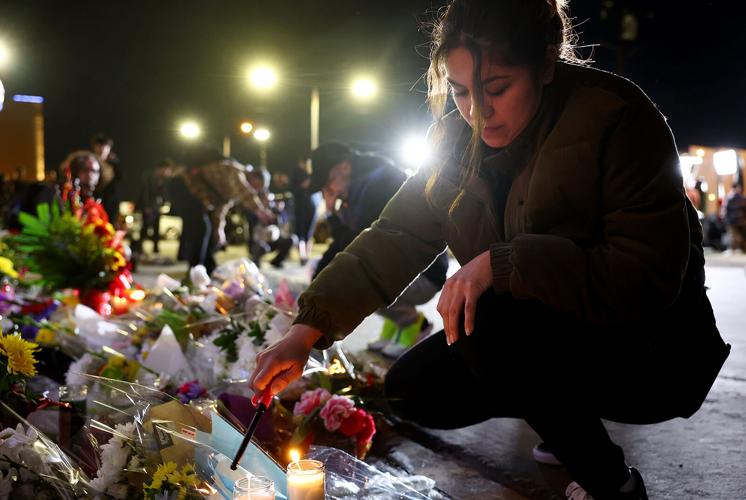 A person kneels to light a candle at a makeshift memorial outside the scene of a deadly mass shooting at a ballroom dance studio on January 23, in Monterey Park, California. 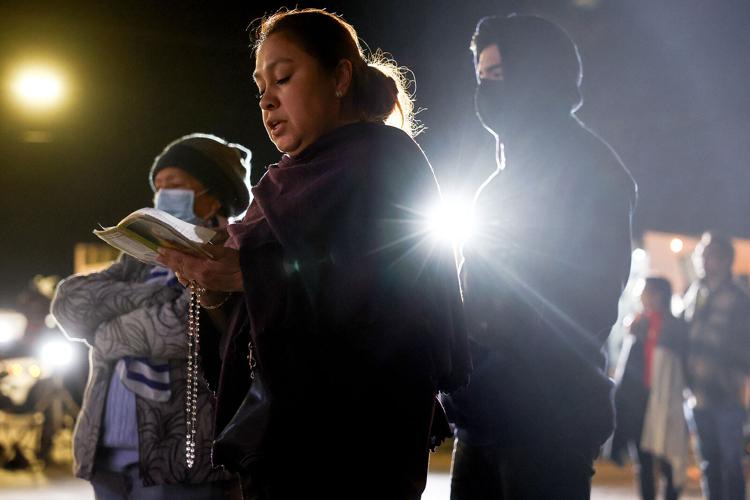 A person prays the rosary at a makeshift memorial outside the scene of a deadly mass shooting at a ballroom dance studio on January 23, in Monterey Park, California.

A Monterey Park police officer stands guard near where vendor tents once stood for the Lunar New Year festival near the Star Dance Studio in Monterey Park, California on January 22.

A person kneels to light a candle at a makeshift memorial outside the scene of a deadly mass shooting at a ballroom dance studio on January 23, in Monterey Park, California.

A person prays the rosary at a makeshift memorial outside the scene of a deadly mass shooting at a ballroom dance studio on January 23, in Monterey Park, California.

As investigators work to determine a motive in the mass shooting that killed 11 people and injured nine others at a dance studio on Lunar New Year in Monterey Park, California, the community now faces a long road to recovery, the city's mayor said.

The Saturday night shooting came as the city's majority Asian community was marking the Lunar New Year, transforming one of the most auspicious days of the calendar into a tragedy.

"There is a lot of fear and anxiety out there. People are fearful of this kind of situation where our joyous Lunar New Year celebration was turned utterly upside down into tragedy and fear," Rep. Judy Chu, who represents Monterey Park, said Monday at a candlelight vigil for the victims.

California Gov. Gavin Newsom was meeting with victims of the shooting Monday when he was pulled away to be briefed on another fatal mass shooting in Half Moon Bay -- the state's second mass shooting in three days. "Tragedy upon tragedy," Newsom said in a tweet.

Monterey Park's mayor sent condolences to Half Moon Bay, saying, "I know what is in store for them in the next few days."

The messages came as authorities revealed new details from their search of the home of the Monterey Park shooting suspect, 72-year-old Huu Can Tran, in Hemet, about 80 miles east of Monterey Park.

CNN is also learning further information about the 11 victims, including Valentino Alvero, a 68-year-old who spent his free time at the dance studio, his son told CNN.

"He'd dance around the house," Val Anthony Alvero said of his father. "He loved that kind of stuff."

Still, as investigators probe the large cache of ammo they found, it remains unclear what motivated the Saturday night attack at the Star Ballroom Dance Studio and later at the Lai Lai Ballroom.

"Did he plan this? Was it the day of? Was it the week before?" Luna said at a news conference Monday. "We don't know. But we intend to find out."

Three people who knew Tran, including his ex-wife, told CNN he had once been a familiar face at the Star Ballroom Dance Studio, where he gave informal dance lessons. But it's not clear how often he visited in recent years, if at all, and authorities are still investigating whether any of the victims were known to Tran.

"There is certainly the appearance that this was targeted," Los Angeles County District Attorney George Gascón told CNN. "Clearly, he knew where he was going, and he was familiar with both of the locations."

Mayor Lo said Tuesday he hopes the dance hall can become a safe place again for the community.

"It was a place for people to socialize, to learn how to dance," he said. "We want to make sure that this dance hall continues to thrive and that people feel safe that they can socialize."

42 rounds were fired inside the ballroom, sheriff says

The shooting at Star Ballroom Dance Studio happened around 10:22 p.m. Saturday. The gunman fired 42 rounds of ammunition from a semi-automatic handgun at the dance hall before leaving the scene, according to Sheriff Luna.

At least one person was shot in a vehicle outside the dance studio, and police believe Tran shot that person first before he entered the dance studio and opened fire on the crowd of civilians, the sheriff said.

Monterey Park officers were at the studio within three to four minutes, arriving to a scene of "carnage" as people lay wounded and others were pouring out of the venue, Monterey Park Police Chief Scott Wiese said.

About 20 minutes after the shooting, the suspect -- still armed -- showed up at a second dance studio in nearby Alhambra. There, a 26-year-old civilian charged him and wrestled the gun away from him, saving countless other lives, he told CNN's Anderson Cooper on Monday.

"I just had this rush of thought and adrenaline. I was able to come to the conclusion that I needed to do something, I needed to grab the gun. I needed to save myself and people inside," Tsay said.

The suspect fled and Tsay called police to the site, where investigators traced the firearm to Tran, according to a law enforcement official with knowledge of the case. The weapon was described as a 9 mm semi-automatic MAC-10 pistol with an extended large-capacity magazine, according to Luna, who added the assault weapon appears to have been modified.

California has banned the use of large-capacity magazines holding more than 10 rounds of ammunition.

Less than a day later, Tran was found dead inside a white van about 30 miles away in Torrance as a SWAT team swarmed the vehicle. The sheriff said he died following a self-inflicted gunshot wound. Investigators also recovered a Norinco 7.62 x 25 handgun registered to the suspect inside the van, Luna said.

Ballistic and forensic comparisons will need to be done on all the items recovered from the alleged shooter's home, as authorities also look into Tran's history.

So far, the sheriff has said the suspect had a "limited criminal history," noting an arrest in 1990 for unlawful possession of a firearm.

Rep. Judy Chu said the gunman who killed 11 on Saturday night "took them away from their families at a night that was supposed to be joyous, Lunar New Year."

The victims -- five men and six women -- were all over the age of 50, and three were over 70 years old, according to the Los Angeles County coroner's office.

At least one of those killed was a Chinese citizen, and one of the victims, Alvero, was a US citizen of Filipino descent, according to the countries' consulates in Los Angeles.

Two Taiwanese Americans were also among the victims, according to Taiwan's de facto diplomatic representative in Los Angeles, the Taipei Economic and Cultural Office.

Alvero's son told CNN his dad was always upbeat and caring for others. His father had hoped to retire in about a year and return to the Philippines.

Nhan, known as "Mymy," loved to dance and spent many years at the dance studio where she was killed, according to a statement from her family.

Nhan's dance instructor, Maksym Kapitanchuk, told CNN she was a delight to have around.

"She would always smile," Kapitanchuk said. "I don't even think I've ever seen her without her smile -- even through the mask I can see her eyes smiling. She was the delight of the class, of any party, any class."

At Monday's vigil, leaders described the shock and the loss being felt across the Monterey Park community.

On Saturday, community members had been celebrating the Lunar New Year at the ballroom alongside dancing grandparents. "Now some of them are no longer with us," she said.

Many leaders praised the community for coming together in the wake of the tragedy.

"We will not let this murderer defeat us," Former Assembly member Mike Eng said at the vigil. "We will move forward with more enthusiasm and more love, because the only thing that defeats hate is love."

Zelensky to US lawmakers: 'We need you right now' as he invokes Pearl Harbor and 9/11

The soda market is flat, but not for Dr Pepper